“Charm and a pair of glasses that makes me look much smarter than I actually am.”
Stoodio News 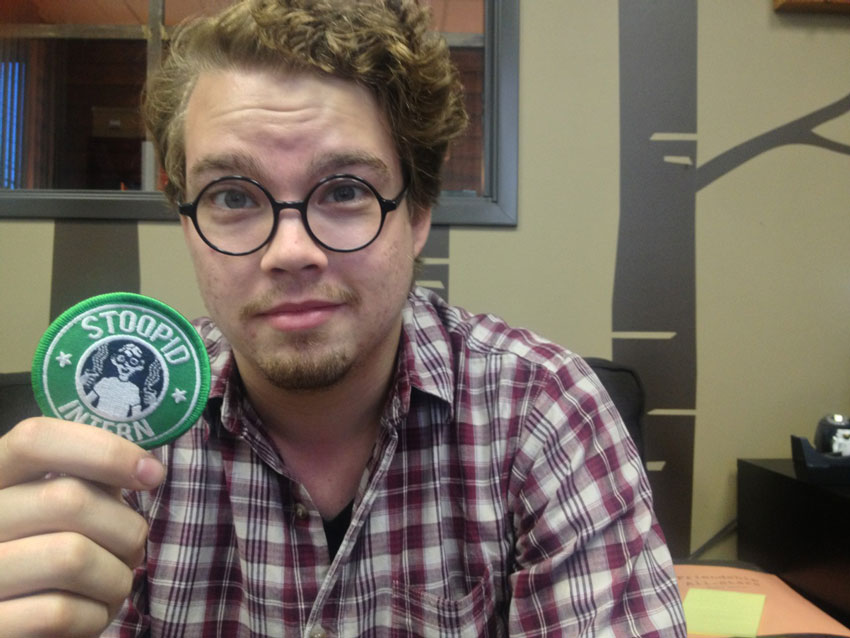 How did you land an internship on Robot Chicken?

M: The same way I’ve landed anything in this life, charm and a pair of glasses that makes me look much smarter than I actually am.

Walk us through your day-to-day here at SBS.

M: I woke up as I do every day at 7a.m. due to hellish nightmares and an impeccable internal clock. I meditated for an hour and a half, ate a healthy breakfast of soul-searching and eggs, grappled with the struggles of parking in L.A., and was at the stoodio by 9:30. From there, it’s all very hush-hush, but suffice it to say I’m doing the office work of this country’s most brilliant minds.

What have you learned since starting your internship?

M: I’ve had a wonderful peek into the world of stop motion, which has taught me quite a bit about frame rates, friendship, and fart jokes. Also, Microsoft Excel. I’ve learned how to use Microsoft Excel.

If you were suddenly orphaned and you had to choose one of the writers to be your legal guardian, who would you choose and why?

M: The writers and I very rarely speak. Our relationship is distant. But I’m desperate for their approval. So in a way, they’re all already a lot like my father.

Since you have access to the scripts of season seven as they’re being written, what can you say about the upcoming season without giving ANYTHING away?

M: Without giving anything away, the only thing I can really do is advise THE WORLD that if each and every one of you don’t take the time out of your day to peep this season, then turn those eyes on thine self for some hardy self-reflection, because you made a mistake. Not watching this season would be a BIG mistake. Watch it.